Chapter 28: Attention on the Town of Monsters

Nansou is Souka's subordinate. He forms part of the Shadow Squad, mostly gathering information. He used to live in the Lizardmen marshes but moved to Tempest by Abiru's order.

As a nameless Lizardman, he was a brown anthropomorphic lizard. He wore light armor and a helmet.

After being named by Rimuru and evolving into a Dragonewt, he took on a more human appearance with blue hair and wears ninja-like attire. He's also able to hide his wings and horns, which makes him perfect for infiltration missions as he is able to pass off as human. The color of his wings and horns didn't change after evolving.

Originally a Lizardman working under the orders of Souka.

He was first shown following Souka to Tempest after receiving orders from Abiru to sharpen his abilities. After being named by Rimuru, he began to work under Souei's orders. He has been seen fighting with Souka and the rest against Charybdis' attack. During Falmuth's invasion he was asked by Rimuru to gather intelligence within the barrier, without fighting. Then he took part in Tempest's counterattack. He was sent to the north as part of Souei's team and managed to kill the soldiers without much effort. 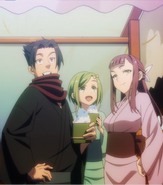 He briefly appears in Slime Diaries along with Touka and Saika.
Add a photo to this gallery

Retrieved from "https://tensura.fandom.com/wiki/Nansou?oldid=62163"
Community content is available under CC-BY-SA unless otherwise noted.