Start a Wiki
This article may require a cleanup to meet the wiki's quality standards.
Please revise this page to fix any grammatical errors, poor wording, formatting and other issues.

Myulan the Ring Finger, was one of Clayman's Five Fingers acting as one of his spies.

Normally, Myulan would disguise herself to look like a regular human. But She's actually a Majin and her true form reflects that. Regardless of the form she takes, Myulan retains a graceful beauty. 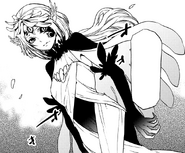 Myulan is a very responsible person, she's a careful woman who tries to plan things ahead in her favor.

She had no experience in love. Though Myulan ends up falling in love with Farmenas, a human who accepted her true self; Myulan noted Farmenas was the only one to have won her heart in the long time she has been alive.

Myulan was once a witch, living in The Great Jura Forest. Persecuted by others, she had fled here three hundred years ago—quietly researching her magic, interacting with no human or Majin. But those days were nearing their end. Extending one’s life with magic only worked for so long.

Facing death, Myulan had some slight sense of regret. She had yet to even peer into the great, dark crevice that was the world of magic, and she had no successor to take on the knowledge she gained. She couldn’t help but ask herself what her life was even for.

In the midst of this impasse, she was greeted by the demon lord Clayman. He had been at that post for about three hundred years, and he was negotiating with the more well-known monsters and Majin in the area at the time—or smashing them to bits, one or the other. He was building an army of subordinates at an astonishingly rapid pace, and that was what brought him to meet Myulan today.

Seeking the witch’s magic, he made her this offer: "Let me grant you eternal time and a young body that will never age. In exchange, I ask you to swear your allegiance to me."

Myulan accepted it, and right now, she thought it was a mistake. She did indeed grow younger, earning the gift of eternal life—but in the process, she lost her freedom. It was a terribly unfair, uneven bargain. For the demon lord, swindling someone with as much magic knowledge and as little experience with the outside world as Myulan was like taking candy from a baby.

The moment she made the oath, a cursed seal was carved into her heart. The so-called Marionette Heart was one of Clayman’s most secret of mystic abilities, allowing him to use a mix of fabulously expensive magical media with the magicules of the target to turn the receiver into a Majin.

This skill was pulled off successfully, and Myulan was reborn—and became a marionette, unable to defy the will of Clayman.

With the magical skill she already bore, Myulan proved to be a fairly high-level Majin. It was nothing that made the now-captive witch content. Ever since that moment, she was Clayman’s eternal puppet.

She could not understand people like Gelmud: Majin who willfully wanted to be ruled over. She was always looking for a gap, a loophole she could use to free herself from the curse and strike back at Clayman. But her knowledge told her this was all but impossible. The moment she broke through Marionette Heart, the demon lord told her, she would revert to human form. Frozen time would start to flow for her again, and there would be little, if any, of it left to her natural life span. And there was another reason: Clayman was just so much more powerful than she was—enough to make her writhe in disgust.

So Myulan continued to serve the demon lord, knowing she would never find it in herself to defy him and dreaming of the day she might be released from this detestable curse.

She was assigned by Clayman secretly investigate Jura Tempest Federation. But she could not get too close as it might draw the attention of Demon Lord Milim Nava., so she chose to observe from afar.

She could tell Clayman's interest in her was dwindling, and she decided some brash action was called for. She was to gather intelligence, so she thought of ways she might be able to enter the town. It was a group of humans who caught her eye first. Infiltrating this group would be the perfect approach, she thought. It’d let her enter town freely and with the perfect alibi. So she chose to pretend to be a human and join the Frontier Garrison as a way to gather information more freely.

She first set out to the Farmus Kingdom where the group of humans often gather and got herself an adventurer license. She then requested to join Youmu's party but was instead looked down upon. After defeating Youmu, Rommel, and Jagi, They welcomed her into the party and became their advisor.

She was responsible for giving tactical advice to the party, providing in-the-field guidance on working together to fend off monsters and magical attacks. She had inadvertently admitted to them that she was a wizard, but there was no point regretting that after the fact. She couldn’t take back the words, so she resigned herself to their consequences, offering her teachings to Rommel, Jagi, and everyone else in the party at least somewhat familiar with magic.

As a military adviser, she had one other important role: casting the deciding vote on the party’s actions. This was its own barrel of monkeys, one that required far more work than she’d anticipated.

Through it all, days passed on as Myulan firmed up her position on Youmu’s team. Defeating monsters, saving villages…

But even as she whined to herself about it, she also felt oddly fulfilled. Dealing with people for the first time in ages, recalling emotions she thought she’d forgotten about. And then, finally, mercifully, the group found the opportunity to head back to Tempest.

Back in Tempest, Grucius had underestimated her and was defeated making him fall for her. When Gobta saw this, he had asked her to help him in defeating Hakurou. Hakurou ended up managing to defeat all of them together.

Several weeks had passed, enough time for Myulan to get fully used to life with Youmu and his crew when her leader spoke to her and confessed his feeling. The sheer frankness of the confession made Myulan’s cheeks flush. The last time she was (chronologically) a young woman, it was a good seven centuries ago. Her memories of it were vague at best. No memories of anyone else back then. To her, romance was a completely novel experience. Unexplored land. So she opted to delay her response. The logical part of her brain told her to say no and get on with life, but somehow, she didn’t quite have the courage for that. Four hundred years of life as a Majin, and it was the first time she had ever felt so anxious about herself. Even after the confession, life went on as usual.

Somewhere along the line, Myulan began to have daydreams of herself more closely united with Youmu. The logical part of her brain denied it could ever be a possibility, but she just couldn’t bring herself to abandon the thought. Her mind gradually began to open itself to it, enthralling her so deeply that she didn’t even notice Grucius staring at her, a troubled, lonely expression on his face.

Until suddenly, she received a magical communication from Clayman. Clayman found her intel to be of use and things are going well for him, and he's starting to consider setting her free. He had told her there is only one final order to follow and if she turns him down she'll die and see the man she loves die before her eyes.

He ordered her to deploy a special sort of high magic. This magic involved taking the entire area within a three-mile radius and converting it into an anti-magic zone. Spells like these took time, so he ordered her to begin working on it at once. The purpose was to shut off communication with the outside world

What’s more, this magic was meant as a defensive spell against other magic. It was being specially customized to fulfill Clayman’s request, and as a result, it would have to be launched around a circle with her at the center. There was the rub. To keep high magic going, Myulan would have to reveal the identity of the high-level Majin who drove it: herself. There was no way doing so wouldn’t draw the attention of the locals.

In effect, Myulan, a magic-user, was being faced with a potential angry mob of Tempestians in a zone that she herself had blocked all the magic from. It was essentially being ordered to die. The magic Clayman stipulated was positionally based, so once it was launched, it’d last for several days whether Myulan was around for it or not. She was, in effect, a throwaway piece of the puzzle.

Receiving this order crushed her. But there, yet again, the figure of a single man in her life crossed her mind. If she refused this order, it would bring that man an all-too-tragic fate. Myulan knew this better than anyone else, and that was exactly why the only choice available to her was to accept it.

She was caught by Grucius and Youmu before she could prepare her spell. After revealing the fact that she's a Majin, Youmu instead claims that he still loves her and wants to protect her. However, Myulan continued to cast her spell, fearing that going against the order would mean the death of the man she loves.

Although Myulan had followed her last order, she never received her heart back from Clayman. She chose to admit her crimes and take responsibility for the death caused indirectly by her magic.

As punishment, Rimuru pierced Myulan's chest and crushed her temporary heart, lifted the curse, and then she created a new core. She had finally become free, and she chose to be tied down(married) for a short human lifespan. She then helped Rimuru by strengthening the barrier around town to help keep the souls from dispersing so the resurrection plan can succeed.

After Rimuru explained his plans of crowning Youmu as the new king of Farmus, Myulan decided to help Youmu become a king and guide the nation as to never oppose Rimuru ever again.

She was a wizard, a master of three different systems of magic.

Retrieved from "https://tensura.fandom.com/wiki/Myulan?oldid=47120"
Community content is available under CC-BY-SA unless otherwise noted.