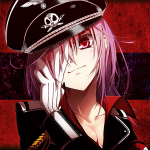 Hi, I'm an admin of this wiki. This is my message wall. If you have a question regarding the series or the wiki in general, feel free to leave a message. Some things to note: