Episode 12: The Gears Spin Out Of Control

Laplace (ラプラス, rapurasu) is a Majin who is a member and vice president of the Moderate Harlequin Alliance.

He wears an asymmetrical clown mask drawn to look as if they were making fun of their enemy.[1]

Despite his seemingly laid back attitude, Laplace is actually a strong and cunning individual who cares a lot about his friends.

He aided Gelmud and Clayman in the creation of an Orc Lord, in hopes of it becoming a Demon Lord that they can control.

At one point, Laplace and Gelmud were confronted by Treyni, but they escaped before she was able to apprehend them. Laplace escaped to Clayman's territory, where they observed the events unfolding at the marshlands through crystal orbs.

Laplace infiltrated the Western Saints Church to try and find out the secret behind it but ultimately he failed after encountering Roy Valentin and had to run away. He tells this story to a mysterious black haired man and a female elf known as Kagali who is later revealed to be the Demon Lord Kazaream. After he finishes his story, he asks about what Clayman is doing but neither the mysterious man nor Kagali know.

Later, Laplace tried to sneak inside the Church again but failed like last time. This time he was caught by Hinata Sakaguchi. He ran away but was stopped by Roy Valentin, who was in a weakened state at the time. Roy mocks Laplace and tells him that Clayman died. In response to this Laplace is angered and murders Roy and all the guards he encountered on the way back.

After he escaped the Holy Empire Ruberios, he tells the mysterious man, Kagali and the other 2 clowns that Clayman died. Their response to this is accusing Laplace of lying and joking. The mysterious man blames himself for his death but Laplaces comforts him and says that Clayman was too reckless and it cost him his life. In response to this Footman becomes angry at Laplace but Kagali calms him down. After everyone regained their calm attitude, they started discussing what to do next. Kagali tells the others that the base of Clayman fell during a single evening at the hands of a small force sent by Rimuru. This was the final straw that made them realize that they can not do anything else for now.

After the mysterious man, who was revealed to be Yuuki Kagurazaka returned from the Tempest Founding Festival, he held a meeting with the clowns. Laplace wondered why Yuuki was frustrated. Yuuki tells how he lost confidence after seeing how powerful Rimuru is and they have to rethink their plans. They decided that the best option would be to stay neutral towards Rimuru. After that, Yuuki gave the job of handling the delivery of summoned otherworlder children to Leon, to the clowns. A bit of thinking later the clowns realize Leon Cromwell's goal. Yuuki explained his plan to Laplace and others and the meeting ended. They were on the move again.

Little is known about his abilities but he is estimated to be around Special A rank. 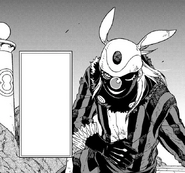 Add a photo to this gallery

Retrieved from "https://tensura.fandom.com/wiki/Laplace?oldid=60802"
Community content is available under CC-BY-SA unless otherwise noted.