Chapter 43: To the Human Kingdom (Mentioned)

The Kingdom of Ingracia (alt. Ingracia Kingdom) is the most advanced city in the world and housed both the Conference Coalition and the Freedom Association.

The royal capital is wide, but there's also a large wall surrounding the city. There are two gates leading into it, and there's no way in except for the two gates. Adventures are able to quickly pass through one of the gates; normally, one has to undergo three different identity checks to be permitted access. At the first step, they check identification documents. If one successfully passes this check, one has to go through a thorough body search. Then, line up in another line. Each point is heavily protected, and the lines are far longer than the one in the Dwargon. Even if there are any problems during one's second check, one could go on to the third, but he or she would be treated as a criminal from then on. Basically to discourage one from trying to enter. This all proves just how beguiling this city is to foreigners.

The city was planned ahead of time by the Council. Many tall structures fill the city. Most are at least five stories high. The city is full of brick and wood buildings. But more than anything, it is the strict city planning and the white castle in the middle of the city that makes one wonder. A large lake occupies the center of the city, and a castle was built in the middle of it. Four bridges extend from the castle and connect to the city's main roads. This solemn piece of architecture properly conveys the country's military strength.

What's even more amazing than the city's appearance is its advanced culture. There are many large gymnasium styled buildings used for concerts. Busy squares are home to performers and theaters. There are also lots of advertisements for performances. Truly a metropolis.

The city is separated into four large districts. The merchant's district, the sightseeing district, the production district, and the residential district. Separated by the castle in the center, a circular city.

In the sightseeing district is a section dedicated to inns. The sightseeing district is near the walls, with various attractions lined up in the streets. There are also quite a few street vendors. Closer to the center is a large building intended for diplomats and conferences. There's also a school inside. Of the four sections of this district, it is the most heavily guarded. Close to this section stands the Freedom Association's headquarters. Next to it, is a building affiliated with the Western Saints Church. A Saint Cross symbol stands proudly on the top.

From the perspective of defense, every important junction has knights monitoring public order. One would have to be pretty desperate to even attempt a criminal act.

The Kingdom of Ingracia specializes in wine. They do have a beer, but it's not very good. It lacks a punch or maybe it's not carbonated enough, or maybe the fact that it's lukewarm makes it unpleasant.

Bath culture existed only in the Kingdom of Ingracia until Tempest built their own. 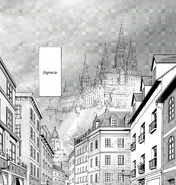 Anime
Add a photo to this gallery
Retrieved from "https://tensura.fandom.com/wiki/Kingdom_of_Ingracia?oldid=44154"
Community content is available under CC-BY-SA unless otherwise noted.