Gluttony (, Guratonī, lit. "Gluttony") is a Unique Skill that is the evolved form of Unique Skill Predator created by combining it with the Unique Skill Starved.

Gluttony keeps four of the five original abilities of Predator (the remaining "Analysis" being transferred to Great Sage instead), the stomach capacity doubled, and these three Sub-Skills were added: 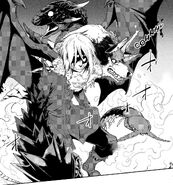 The result of letting Gluttony take direct control of one of Rimuru's clones (Vol. 12 Ch. 55)

Community content is available under CC-BY-SA unless otherwise noted.
Advertisement