Main article: That Time I Got Reincarnated as a Slime: Lord of Tempest

That Time I Got Reincarnated as a Slime: Lord of Tempest (転生したらスライムだった件 ～魔国連邦創世記～, Tensei Shitara Slime Datta Ken ~Makoku Renpou Souseiki~?) is a Japanese mobile game based on the series.

Characters from the series have also appeared in Seven Deadly Sins: Hikari to Yami no Grand Cross in a collaboration event.

Rimuru, Shizu, Shuna and Milim have appeared in SINoALICE in a collaboration event.

Main article: That Time I Got Reincarnated as a Slime: Isekai Memories 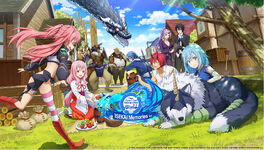 Tensura Mod is a work-in-progress Minecraft mod made by MinhEragon. Tensura Mod is a fantasy-themed mod that is based on this series. The mod is currently playable on version 1.16.5 though development on the 1.16.5 version has stopped as the Final Update was released on the 28th of September, 2021.

However Minh and the team of admins have confirmed 'Tensura: Reincarnated' which will be a remake of the mod.

Check out the wiki: https://tensura-mod.fandom.com/wiki/Tensura_Mod_Wiki

Community content is available under CC-BY-SA unless otherwise noted.
Advertisement