Framea (フラメア, furamea) is a Rabbitman from the Rabbitman Tribe of the Jura Forest and is the main protagonist of the spin-off series, The Ways of the Monster Nation. She loosely works for Ruminas Valentine, who gave Framea her name.

Framea has a cheerful personality. She has a habit of rating things because of her Unique Skill, Dilettante. She is shown to be wary of humans even though she does not voice it out loud.

Because of her skill, she is very curious of her surroundings throughout Rimuru City and desires to experience it all.

She is also a bit clumsy as shown when she dropped her note and when she forgot to bring enough clothes.

She appears to lack confidence in her abilities but always tries her best to please.

She is shown to be nervous but respectful around any exceptionally strong individuals like Rimuru, Veldora, Milim, and Ruminas. Her respect for such figures can backfire, as asking Veldora and Ruminas for help understanding what nobles liked lead her to being in debt. Despite Rimuru showing a friendly and amicable attitude, she remains jumpy around him. Her skittishness seems to stem from how Ruminas toys with her.

Her curiosity and aiming to please those around her has made her somewhat fearless if not hard-working as she's willing to face more dangerous experiences like Monsters, Dungeons, and prototype amusement park rides.

Framea is a short stature girl with brown hair, rabbit ears, and eyes.

Milim noted that she has an unpleasant smell. Possibly from being a servant of Ruminas.[1]

She wears an outfit given to her by Shuna. She also wears a hat. The clothes are loosely based on a traditional Kimono outfit and a black pork pie hat.

Framea ran away from home in order to satisfy her curiosity about Rimuru City. She was named by Demon Lord, Ruminas Valentine.

She was first seen staying in a hotel in Rimuru City. Framea stays over in Tempest where she meets Veldora making takoyaki. After eating one, she was able to deduct its ingredient and grade it with her Unique Skill while also writing it down in a notebook. She temporarily loses her notebook until Rimuru discovers it. After her conversation with Veldora, she was approached by Souei. He informs her that Rimuru asked him to find her. He then invites her and offers the job of creating a guidebook of Tempest to evolve its cultural exchange. She was hesitant at first but happily accepts after being offered clothes, food, shelter, and the first to try any new facilities and products.

After that, she went shopping with Shuna and explores Tempest together. Because Rimuru asked Shuna to introduce her to the clothes of Tempest. Together, they picked clothes for Framea in a shop. she tried a multitude of clothes. In the end, Shuna gave her an outfit that she sews by herself. Framea was also given a hat customized for rabbit beastmans by the shop staff.

After getting her new outfit, she went to observe the soldiers of Tempest training. Then she was asked if she wanted to join the training. After that, she witnessed Gobuta cutting stone in half, he then boasted about it to her. Hakurou suddenly appeared and demonstrated his ability. Hakurou's ability amused Framea. She then thought about getting a weapon. Gobuta brought her to Kaijin's Workshop. Frameathen tried a variety of weapons. Firstly, she tried the battle-ax. But it was too heavy for her, then she tried the whip while trying the whip she learned about enhancement. But she accidentally hit Gobta. While Kaijin was showing her the other weapons, she saw the boomerang. She next equipped it with the wind gem.

A boomerang created by Kaijin. It is embedded with a wind gem that gives it destructive power and is light as a feather.

Camera A Camera was given to Framea to replace the drawings she drew with Photos for the Guidebook. The camera was created by Vesta and was thought up by Rimuru. There is currently only 1 Camera created and it is in Framea's Possession.

She wears an outfit specifically made for her by Shuna. It is very comfortable. It has both heat resistance and cold resistance. It is made from the thinnest magical thread. It also has a high defense rating. The outfit has magical power embedded by Shuna.

She also wears a hat customized for her Rabbitears. 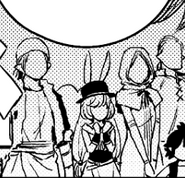 Add a photo to this gallery

Retrieved from "https://tensura.fandom.com/wiki/Framea?oldid=57863"
Community content is available under CC-BY-SA unless otherwise noted.