Empowerment (地位向上編, chii kōjō-hen?) is the first volume and the first story arc of the light novel of That Time I Got Reincarnated as a Slime.

Lonely thirty-seven-year-old Satoru Mikami is stuck in a dead-end job, unhappy with his mundane life, but after dying at the hands of a robber, he awakens to a fresh start in a fantasy realm...as a slime monster! As he acclimates to his goopy new existence, his exploits with the other monsters set off a chain of events that will change his new world forever![1]

The Conqueror of Flames

Battle of the Goblin's Village 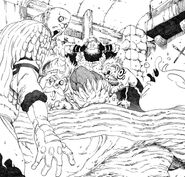 Rimuru and the Dwarven Brothers

The Girl and the Hero

This volume was adapted into the following material:

Hello there! Fuse here. First of all, I’d like to thank you for picking up this book.

This volume is a heavily revised, rewritten, and expanded version of a story originally released on the web. This work, as I’m sure some of you know, is still being released on syosetu.com, a Japanese-language website for online novelists and storytellers. The side story and other extra material in this particular book are all original to this volume, crafted for followers of the web version to enjoy.

If this is a completely new tale to you, I’d like to suggest that you check out the web version as well. The main plot is the same between both versions, but you’ll also find a fair number of differences here and there, so I imagine it could be fun to compare the two for yourself. This is the first time I’ve ever written an afterword, and figuring out what I should write in it has made me slightly nervous. As a result, I suppose I should write a word or two of thanks to the original forces that brought this book to life. First, thanks go out as always to the people that read and supported this story on the web. Your reviews and thoughts gave me a great deal of strength. Thank you, Mitz Vah, who provided the wonderful illustrations for this book and gave so much life and motion to all the story’s many characters. I’m sure I’ll be making lots more selfish requests to you going forward, but I hope you’ll be willing to put up with it.

Thank you, Mr. I, the editor who first approached me about making a print edition. If it weren’t for his passion, this volume never would’ve been released. Finally, thank you to everyone who purchased this book. If you read through That Time I Got Reincarnated as a Slime and liked it, nothing could make me happier. With that, I hope to continue having you read my stories. Thanks again, everyone!