Chapter 52: Souls That Can Be Saved

He was originally a Greater Demon who was summoned to fulfill a contract of inhabiting a Golem created by Rimuru to be the guardian of Ramiris' Labyrinth for 100 years. As soon as he possessed the Golem and was named, evolved into an Arc Doll.

Later on, under the agreement of all parties involved, the original contract was annulled and Beretta permanently became Ramiris' subordinate as her aide and Rimuru acted as a kind of 'secondary master' as the original contractor and creator of his physical body, meaning it was still possible for him to receive power from Rimuru through the soul corridor and evolve.

When summoned by Rimuru, Beretta was a Greater Demon, much more muscular compared to a Lesser Demon. On both side of his head horns protruding. With black skin, dressed in expensive clothes.

A doll necessarily uses spherical joints. But surprisingly, the golem came out just as Rimuru had imagined it. In order to move the golem all that is needed is to direct magical energy into the joints. Rirumu made the face look like his mask; the golem was as large as a human, 180cm tall to be precise.

After receiving the name Beretta, he began to evolve. He first formed into a circle, but then chest, head, hips, arms, and legs formed, along with a face. His face was now hidden behind a mask and, instead of the black skin, long black hair now adorned his body. His skin was pale, and bloodless. The eye slits on the mask glowed crimson.

He was summoned to inhabit a golem created by Rimuru to protect Ramiris and the Labyrinth. The length of the contract is a hundred years. The payment for the contract was Rimuru's magical energy, which he already received from the summoning. Afterward, he could keep the body or throw it away. He requested that after he has protected Ramiris for a hundred years, he be allowed to serve under Rimuru. And If he only promised him this, he would never bother him with another payment.

Later Guy Crimson convinced him (with a bit of a threat included) that serving two masters at the same time is a bad idea and that he should rather choose one true master to serve. Beretta agreed to truly follow Ramiris from that point on, but ultimately Beretta had his own idea how to "implement" this. He led Ramiris into making the Jura Tempest Federation their new "headquarters." One thing led to another and in the end Ramiris recreated the Labyrinth space underneath the Tempest Collosseum, managed together by Ramiris and Rimuru, making Beretta's plans a success.

Before being given a name and a body he was a high ranking Greater Demon, at least rank A-. But with a body, his power had risen to about twice the strength of the Elemental Colossus, which in turn was stronger than the Sky Dragon, meaning as a named Arch Doll Beretta was at least a Special A Rank monster.

As a Chaos Doll Beretta gained a Chaos Core making him able to resist the effects of Holy Magic. Guy Crimson mentioned that he was not weaker than Shion and Ranga during Walpurgis, meaning at that time, he was already an S Rank on the level of a Demon Lord Seed.

Beretta was first viewing the protection of Ramiris as just his job given by Rimuru, but he warmed up to her quickly. Guy coerced Beretta into "choosing" Ramiris as his primary master, with Rimuru as his sub-master. As long as nothing happens to Ramiris, Beretta will only listen to Ramiris command.

Beretta possesses extremely high loyalty for Rimuru, to the point of fanatical devotion. Beretta has even declared the wish to serve Rimuru after serving Ramiris. When coerced by Guy to serve Ramiris as his primary master, Beretta schemed to have Ramiris join hands with Rimuru, which makes protecting Ramiris considerably easier, lets him be close to Rimuru, and significantly reduces the chance of any situations to occur in the long term that could lead Ramiris and Rimuru into becoming hostile to each other, killing 3 birds with one stone. 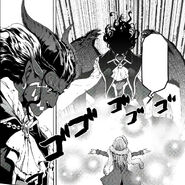